Driving along the main road south of Breese, you will pass a soaring white cross, about 25-feet tall, a remembrance of tragedy that happened 183 years ago. The Cholera Cross is a local landmark with a notable history. 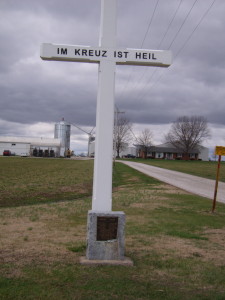 Inscription: In Christ is salvation

Built in 1850, the cross is a memorial to those who lost their lives in the cholera outbreak of 1832. It was a devastating disease caused by contaminated water or food, and transmitted by personal contact. This outbreak was first diagnosed in Chicago, where part of the militia fighting the Black Hawk War was struck. The disease spread quickly, raging like wildfire, eventually reaching southern Illinois where the towns of Breese, Germantown and Carlyle suffered the most devastating losses. During this time, a local farmer, Joe Altepeter, prayed to God to spare his family, and promised that if they lived, he would erect a large cross to profess his faith. His family was spared and Altepeter constructed the cross and mounted it at the road in front of his home. 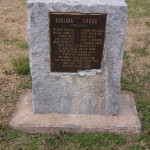 When the original structure deteriorated, it was replaced with other wooden crosses, until the current owners of the property replaced it with a more permanent white concrete cross. A brass plaque notes the story, a reminder of one man’s pledge and a county’s devastation.

The cross sits at the original location on County Highway 7, about one mile south of Breese, just off the lane that runs to a dairy farm. Be sure to stop and take note the next time you drive by.