Germantown, home to St. Boniface Church, is considered the oldest German community in Illinois, with first mention of settlers listed in 1834. (The town was originally called Hanover). Three years later, townspeople wrote Bishop Rosati of St. Louis requesting a priest. That summer, they also purchased land to build a church. 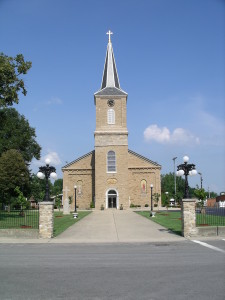 A small house that was on the land became the first church structure. In 1939, a priest was assigned, serving two weeks per month as pastor there, and two weeks in neighboring Mud Creek. As the parish grew, the need for a larger church also grew and in spring of 1940, construction began on what would become the first Saint Boniface Church. A transplant from England, Saint Boniface was one of the first missionaries to the German people, so it was a fitting name for this budding parish.

By 1852, the Church was growing and the need for a larger space with it. Robert Mitchel of St. Louis was contracted to design a new structure, which is the base of our present day St. Boniface Church.

The Church, which was dedicated in the spring of 1856, became the largest in Illinois at its time, with a steeple 44-feet tall. No expense was spared. The steeple alone was $24,000, a hefty price in that era. Church columns were topped with are elaborately-carved capitals. Four magnificent bells were added—and they are still ringing today.

In 1905 a beautiful pipe organ containing more than 1400 pipes was installed, upgraded to its present condition in 1959. Other improvements were made over the years, including redecorating of the altars and statues, and a new clock for the steeple. The most recent renovation occurred in 2000 when the entire church was painted, from floor to ceiling, pews were refinished, and lighting fixtures were refitted and rewired. The communion rail at the front of the church was removed, and several pews in back were removed to make space for handicapped accessible restrooms and a reconciliation room. Cosmetic work was also done on murals, marbling of pillars and the like. On the exterior, windows were resealed and tuck-pointing was done. And after strong winds damaged the roof-top cross in 2003, it was repaired and replaced the following year.

St. Boniface today stands as a testament to a rich German history, and a caring congregation that has kept it vibrant all these years.

When you visit Clinton County, be sure to drive by the Church and check it out.