Everybody let’s rock! This line from the famous Elvis song, Jailhouse Rock, could just as well be the motto for the Trenton, Illinois, bar and nightclub named after that song.

Jailhouse Rock is an homage to the king of rock, and a music club that celebrates the pop star with lively acts. It all started with local resident Jeff Caldwell, whose admiration for Elvis drew him to the persona, and eventually performing. As owner of the club, he started by signing a few songs. 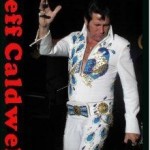 Today, he’s the full package, with sideburns, slick hair—even the famous white jumpsuit. His high-energy show rocks through the repertoire of Elvis hits, complete with all the moves.

Every once in a while, Jailhouse Rock invites other acclaimed Elvis Tribute Artists to perform, and has even held Elvis contests, where visitors can choose their favorite singer. They also will host artists who do tributes to other major stars, such as Buddy Holly, Johnny Cash and Donna Summers.

Do you have an inner-Elvis song waiting to burst out (or some other tune)? You can show off your talent at karaoke, each Thursday and Friday evening.

And if you always dreamed of being married by Elvis, you can do that at Jailhouse Rock too! Caldwell is an ordained minister and will gladly perform your ceremony on-site.

As you can see, Jailhouse Rock is a fun place! The club is located in an 1870’s building that once was a community center with basketball courts, and still sports a neighborhood feeling in its bar.

See, even Elvis loves hanging out in Clinton County!