Okay, all you BBQ fans, there’s a new place to check out for smokin’ great meats in Clinton County, IL: A Fine Swine.

Recently opened in New Baden, A Fine Swine is the brainchild of David Stidham, who grew up in the barbecue-rich environment of Memphis, Tennessee. David was a backyard guru who honed his technique and then took it on the road, pitting his meats and sauce against the best of them, and winning. Among his accolades: 2015 6th Place Overall at the Jack Daniels World Championship Invitational, 2015 Illinois State Champion (Westmont), and 6th Place Pork Overall at the American Royal Championship Invitational in Kansas City, MO.

Thankfully David isn’t keeping his winning recipes to himself, but now showcasing them at his new restaurant. At A Fine Swine, you can taste his Texas-style brisket that is smoked 13 to 15 hours over post oak wood straight from Austin. 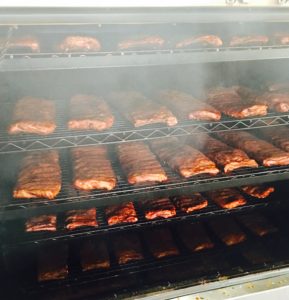 Pork spare ribs are thick cut, seasoned with special spices, slow smoked over peach and cheery woods, and served with his award-winning sauce. The chicken is brined for 12 hours then seasoned, smoked and glazed to deliciousness. Getting hungry?

The restaurant serves plates, combos and sandwiches, plus pitmaster nachos and a lineup of fresh-made side dishes. There’s a nice kids’ menu and, for anyone who has saved the room, fresh blackberry cobbler and chocolate pecan pie. A Fine Swine sells bottles of its famous sauce, and also offers catering—something to keep in mind for holiday entertaining.

This is one more tasty reason to come visit Clinton County!

Images courtesy of A Fine Swine.