Our fair state is having a birthday soon, so we thought this would be a great time to highlight some of the fine—and some of the lesser known—facts about Illinois. 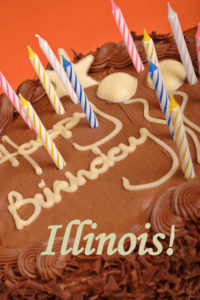 Though many call us the Land of Lincoln, we also are known as the Prairie State, as indeed Illinois was among the first of the Midwestern states to be travelled. French explorers, Louis Joliet and Jacques Marquette, were the initial Europeans to explore our area. After the French and Indian War, it became British territory; and part of the United States after the Revolutionary War. When Illinois achieved statehood in 1818, Kaskaskia was its first capital and the entire population of the State was a whopping 34, 620. Our own Clinton County was created six years later, in 1824, by combining Washington, Fayette and Bond Counties.

Though Chicago became the great port for the state, important river towns sprung up all along the Mississippi. And here in Clinton County we were in the heart of one of the State’s most valuable assets—coal.

The 21st state to be granted statehood, Illinois chose as its motto, “State Sovereignty, National Unity.” Our State tree is the white oak; our flower is the violet. And though many associate the cardinal with St. Louis, Missouri, it is actually the Illinois state bird.

Let’s toast Illinois on December 3. We couldn’t think of a more wonderful state—or a better county—to live in!