Farm fields and forest surround the small town of Beckemeyer, Illinois, which is located in the heart of Clinton County. Like many of the towns around here, it is steeped in history and constantly evolving. 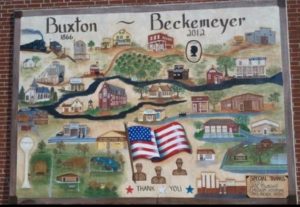 Painting by Carol Archer; located on building on Lewis Street

The first residents arrived in Beckemeyer about 200 years ago, in 1817. A few decades later, the town became a way station on the Ohio and Mississippi Railroad route from Cinncinatti to St. Louis. But coal is what really defined Beckemeyer. A large seam was discovered underlying the village and area and a vibrant mining culture began here in 1894. 50-some years late, however, heartbreak struck the town. A violent explosion in 1947 trapped 142 miners. Only 31 survived the ordeal. Joseph Koch was one of them, his body found kneeling in prayer among his co-workers. Visitors can view a memorial to these men, the Coal Miner’s Monument, on Louis Street. 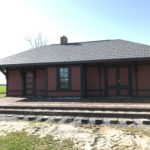 The old train depot at BCDC park, now being restored

Beckemeyer is proud of its community spirit and touts two well-used public parks. A host of activities are held there and throughout the town all year long. From euchre tournaments and wurstmarts to soft ball tournaments and car shows, locals and visitors can enjoy a delightful assortment of amusements. Some of the most popular involve food, of course! And speaking of food, a highlight of fall in Beckemeyer are apples from Taphorn Orchard, where apple picking is a family tradition.

Below are a few of Beckemeyer’s upcoming spring and summer events. All are fun times to visit and see first-hand what a great little town it is. 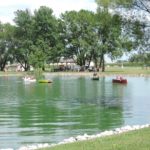 Clinton County is filled with great communities just like this one—and every one would love to have you visit!