Heaven knows nature tried, but St. Mary’s Catholic Church in Carlyle, Illinois, wasn’t about to give up, and 165 years later it stands proud and strong here in Clinton County. 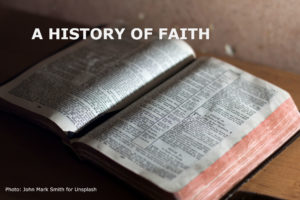 The history of St. Mary’s Catholic Church is one of windstorm, cyclone, fire and tornado—but also one of dedication, persistence and community spirit. Established in 1853 as St. Mary of the Immaculate Conception Church, it was the second oldest church in the county. By the end of that decade, the Church property also included a rectory and school. With the development of the railroad, St. Mary’s parish grew to 150 families and a larger church was needed. A new church—sized 120-feet by 66-feet—was dedicated in 1871, with a 156-foot tall steeple added the following autumn. The old church was converted into a two-room school and a new rectory was built. As the area grew, so did the parish membership and school.

And then disaster struck. Late afternoon in May, 1896, two horrific windstorms destroyed the town of Carlyle and left St. Mary’s Church in ruins, save for the steeple and one wall of the sanctuary. With a loss seven times greater than the insurance, it would take years to rebuild, but rebuild they did. A beautiful new Romanesque-style church was dedicated in 1906, featuring 60 spires on each side of the original steeple. Walls and pillars were rose-colored marble from St. Genevieve, Missouri; the sanctuary featured marble from Italy, Spain and a dark marble from Africa. The glass was commissioned from Munich, Germany; the seats and woodwork were Appalachian oak. In 1907 a large pipe organ, costing $1,700 was installed. What a magnificent church it was!

And then disaster struck again. This time it was a massive fire on May 14, 1940. The damage stripped the tower of bells. A new electric tower clock and the cherished organ were demolished. Seats were gone; glass windows were broken. Fortunately, the sanctuary with its marble work and altars remained intact. But the parish bounced back and the church was reconstructed.

In 1968, disaster struck a third time in the form of a tornado, shattering stained glass windows, tossing benches and damaging the roof, tower and interior. The rectory lost its roof and large trees were uprooted. Again, the parishioners persevered and so did the church. After another violent storm in 1974, the windows were reinforced with heavy plate glass with the hopes of besting Mother Nature.
Today, St. Mary’s Catholic Church stands proud, having withstood more than its share of trauma.

In addition to the visiting the church, be sure to stop by its lovely Our Lady of Fatima Shrine, constructed by parishioners in the 1950’s. Erected at the head of the sunken garden at the Catholic Cemetery, it’s composed of unique glass rocks gathered in Missouri and Arkansas, and pieces from the Petrified Forest in Arizona, as well as some salvaged from the church after the fire. It remains a peaceful place to contemplate when you’ve visiting Clinton County.