From early on, farming has been an integral part of the growth of Clinton County. In fact, it is home to dozens of centennial farms, many from the beginning days of the county. While the size of the farms, techniques and equipment has changed over the years, the fact that agriculture is a driving force in our economy hasn’t. 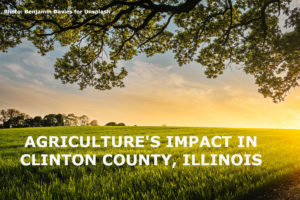 Illinois ranks fourth nationally in pork production, an industry that contributes more than $1.8 billion annually to the State’s coffers. We’re proud to say that Clinton County is the State’s leader in the number of hogs (about 230,000 by 2017 estimates). According to the National Agriculture Statistics Service, our county also has more milk cows—more than 13,500—than any other county in Illinois.

They may be little, but chickens make a big impact here too. Rose Acre Farms in Germantown is a family operation that has grown to be one of the United States’ leading egg producers, with 17 facilities throughout eight states. In addition to high-quality commodity eggs, the company offers choice cage-free eggs and specialty eggs.

But perhaps the most important contribution agriculture has made to our county is a sense of community and common purpose. It’s supported great towns for families to live in and added tremendously to our pride of place.

Take a drive along our country roads and enjoy a big, beautiful slice of our rural Clinton County life.