Driving east into Carlyle, Illinois, visitors will cross over the Kaskaskia River on one of the oldest suspension bridges built in southwestern Illinois and the only remaining suspension bridge in the state: the General Dean Suspension Bridge. 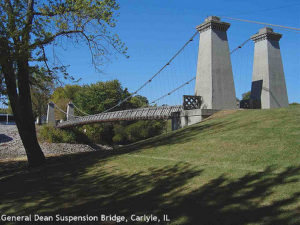 The bridge is impressive with classic pillars anchoring each side and graceful wire suspension. Prior to when it was built in 1859, residents would have to cross the Kaskaskia River via ferry or a log and mud bridge. So this was a huge improvement! The bridge cost $40,000 to build—a weighty amount way back then. But by the middle of the 20th Century, it had nearly 70 years of use and was starting to show its age.

In 1950, the Historic American Buildings Survey recognized the importance of the bridge and recommended that upgrades be made to ensure its preservation. The following year, nearly 100 years after the bridge was built, the Illinois General Assembly approved $20,000 for its restoration.

The bridge was dedicated in 1953 and named the General Dean Suspension Bridge in honor of Major General William F. Dean, a Carlyle native.  Major General Dean, a hero of the Korean War, was the highest ranking officer ever to be held as a POW and a recipient of the Congressional Medal of Honor. In 1973, the bridge was added to the National Register of Historic Places. Often referred to locally as the “swinging bridge,” the General Dean Suspension Bridge offers an wonderful entry for visitors traveling from the west. If you haven’t yet seen it, it’s time you pay a visit to Clinton County, Illinois!