Al Crocker would be the first to tell you he had no intention of having a radio show; he was just trying to help a friend find a good place to fish. Ten years later, Crocker is still telling folks where to fish on his weekly radio show, Fishing and the Outdoors. 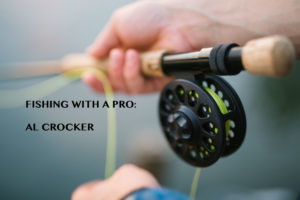 Recorded each week at the WJBD studio in Salem, Illinois, Crocker sits down with a local fishing guide or sporting enthusiast to talk about fishing in the area, specifically on the 13 lakes in Southwestern Illinois. The show has a widespread audience, reaching stations from Decatur to Cairo. Many of the stations run the show several times a week. If you miss a show, or want to check out previous shows, they’re available on the Carlyle Lake website.

Once a fishing guide on Carlyle Lake, Crocker has the demeanor of the good guy next door. His show is straightforward, meant for the everyday man or woman who wants to head out for an enjoyable time, often with their family in tow. He’s not about fluff, but telling it like it is. If the fishing isn’t great, he won’t say it is. But he will tell you wear the fish are biting, offer tips on specific gear ,and suggest bait that would be good to use. He’s a trusted authority and his word is golden with anyone who goes fishing in Clinton County.

Crocker takes off (probably to go fishing!) the months of November and December. The rest of the year he’s just doing what he’s done for the last 10 years: helping out local folks who love to fish.

We’ve got great places to fish, so grab your gear and head to Clinton County!