New Baden, Illinois, was founded in 1855 and quickly grew into a charming enclave of streets lined with maple trees and nearly sixty homes. 41 years later, it was devastated by the worst tornado to ever hit the area. More than 30 buildings were demolished; many more were damaged. And more than two dozen residents died. A new New Baden needed to be built. 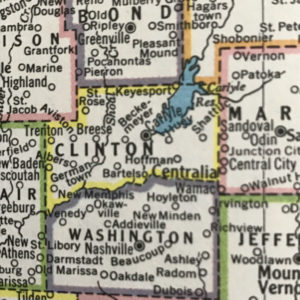 More disaster hit the town in 1982, when another tornado whipped through New Baden, killing 13 people and cause a wealth of destruction. Again the community came together to rebuild.

Drive through the area today and you’ll see a thriving town, with more than 3,300 residents and a great selection of businesses, including two of the area’s most popular restaurants—A Fine Swine BBQ and Good Ol’ Days Family Restaurant—and the always delicious Berkemann’s Bakers Dozen Bakery.

The close-knit community has a 41-acre park with pool, tennis courts, sports fields, a skate-park, picnic facilities, and a nice one-mile walking path. A civic center houses the public library, gymnasium, and a community room that’s used for meetings and events. Throughout the year New Baden can be counted on to host family-fun events, such as a June jamboree to kick off summer season and a Chili/Soup Cook-off in the first week of October.

While the town has several churches, St. George’s Catholic Church is notable for its striking stained glass windows. Eight tall windows tell the story of the Eight Beatitudes of the Sermon on the Mount, depicting a different saint in each.

Take a drive through Clinton County and discover New Baden and all the wonderful towns we call home.