Like many of the small towns in our area, Centralia, Illinois, was a railroading town—its name comes from its position at the center of the state’s rail system. But while the railroad was integral to its growth, so were agriculture, coal, oil—and candy.

In 1938 the Pay Day candy factory came to town and was a major presence through most of the century. One of the other major employers was the Centralia No. 5 coal mine. A large explosion at the mine in 1947 devastated the town, killing 111 people. Folk singer Woody Guthrie would later memorialize this accident in his song “The Dying Miner.” Stop by the Centralia Area Historical Society and you can see exhibits from the mine and disaster, as well as many other interesting facts and memorabilia of Centralia’s colorful past. 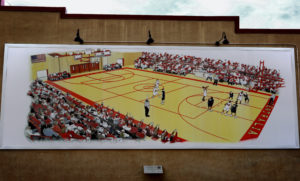 One of the brightest spots in Centralia, a town of just over 9,000 people, is its famed high school basketball program. Having won the Illinois High School State finals a whopping 24 times, the Centralia High School boys basketball program is considered the winningest program in the entire country. No small feat for this small town!

Drive or walk through Centralia, and you’ll see pride displayed in many ways, most notably in wonderful parks. The scenic Foundation Park is a year-round playground with hiking trails, fishing ponds, an ice-skating rink, disc golf course, outdoor amphitheater, shelters, and Chapel in the Woods. This park is also home to the annual hot air balloon festival, held every August.

Train buffs will want to check out Centralia’s Fairview Park, where a classic caboose and a 2500-class steam engine is on display, one of only two remaining from the Illinois Central Railroad. Also at the park is an F-105 Thunderchief aircraft, flown curing the Vietnam War.

And be sure to take time to visit Carillon Park and the Carillon bell tower, one of the ten largest bell towers in the world. A nearby musical fountain keeps sync with the music of the bells during Wednesday and Friday concerts.

Centralia is unique in that it is actually located in four different Illinois counties, one of which is Clinton County. And we’re very happy to have it!