As it works its way from west of Champagne, Illinois to the Mississippi River, the Kaskaskia River flows through the farmlands of Clinton County, defining our southern border, and providing both an important natural resource and a prime area for recreation. 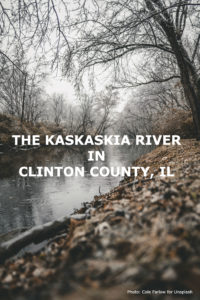 The river’s name comes from a tribe of the Illiniwek, who dubbed it Kaskaskia, meaning “uncertain,” a nod perhaps to the continuous weaving of the river through the land. The Kaskaskia River is the second largest river system within Illinois, encompassing 10.2% of the land surface of the state, winding nearly 300 miles, and including 22 counties in its vast watershed.

In the early days of our county, the Kaskaskia was a bevy of activity as it brought people and trade to the mighty Mississippi. But during a major flood in 1881, the Mississippi River poured through a bend at the mouth of the Illinois river, altering the confluence, and cutting the town of Kaskaskia off from the rest of Illinois. Years later, engineers would again change its course in our county.

Though impressive in size, the Kaskaskia River can be quite elusive as it sneaks through tree-covered land—and even a bit deceiving, as for more than 30 miles it takes the form of two lakes: Lake Shelbyville (Shelby County) and our own Carlyle Lake, the largest inland lake in the state.

Because of its vast swath and the variety of habitats it encompasses, the Kaskaskia River is a prime spot for fishing, with catfish, bass, and sauger among the most plentiful species. But the river’s greatest contribution to the County is undoubtedly Carlyle Lake, created in 1967 when a dam was constructed on the river. Ever since, the lake has been an endless source of beauty and entertainment. From long hikes and fishing to sailing, boating, and swimming, the lake is a year-long favorite of locals and a top draw for visitors.

A lot of history has passed along our Kaskaskia River, and also over it, thanks to the General Dean Suspension Bridge. Built in 1859, this historic bridge made it possible for residents, who had been using a ferry or mud bridge to easily cross the river. A huge improvement! Now listed on the National Register of Historic Place, it is the last remaining suspension bridge in Illinois.

Whether you fish it, walk along it, play in it, or just enjoy its natural beauty, you’ll find a lot to love with the Kaskaskia River here in Clinton County.