From Cholera Cross to General Dean Suspension Bridge, there is something for everyone to learn and enjoy in Clinton County. History buffs and newbies will all discover something new at these fascinating historic sites in Clinton County, IL. Come experience history in the 21st century!

The Beginning of Clinton County

Beautiful Clinton County officially came into existence on December 27, 1824, and was created from portions of Washington, Fayette, and Bond counties. Named after DeWitt Clinton, the seventh governor of New York and architect of the Erie Canal, Clinton County is alive with rich history peppered throughout its towns.

Dating back to before the creation of the state of Illinois in 1818, Clinton County came to be as early as 1814. Settlers to the area started claiming land around this time and the formation of the county started its journey towards what you see now – a quintessential and charming area with welcoming residents.

Here’s a random bit of history trivia for you – The United States Census Bureau, in 1950, determined the mean center of the U.S. population was in our very own Clinton County!

Carlyle was a Stop on the Goshen Trail

The Goshen Trail, a path that spanned from Alton, IL. all the way to Shawneetown, gets full credit for the start of this extraordinary county. The trail was started as a path by meandering bison and discovered by Native Americans needing a better route to trace game. But, thanks to the western settler’s need for salt, this path was made into a more proper road for wagon travellers around 1808 and came to be known as the Goshen Trail.

Carlyle, home of the historic General Dean Suspension Bridge, was a landmark spot along this trail. The bridge was an important part of the trail because it crossed the Kaskaskia River, allowing travelers access to the Ohio salt works.

The Effects of Cholera at Cholera Cross

Located one mile south of Old Highway 50 on Germantown road in Breese, IL, Cholera Cross was first erected in 1850 by grateful farmer Joe Altepeter. His family was spared during a cholera epidemic that took numerous lives and caused gross tragedy. He built it as a thanks to God for his mercy.

Since its first construction, subsequent owners of the property have kept the history of this incredible landmark alive by repairing and replacing the cross whenever time befalls it. A small plaque was added at some point and stands under the towering white concrete cross, a memorial to the lives taken and those that were spared. You can feel history pulsing as you gaze upwards at this grave reminder of the past. 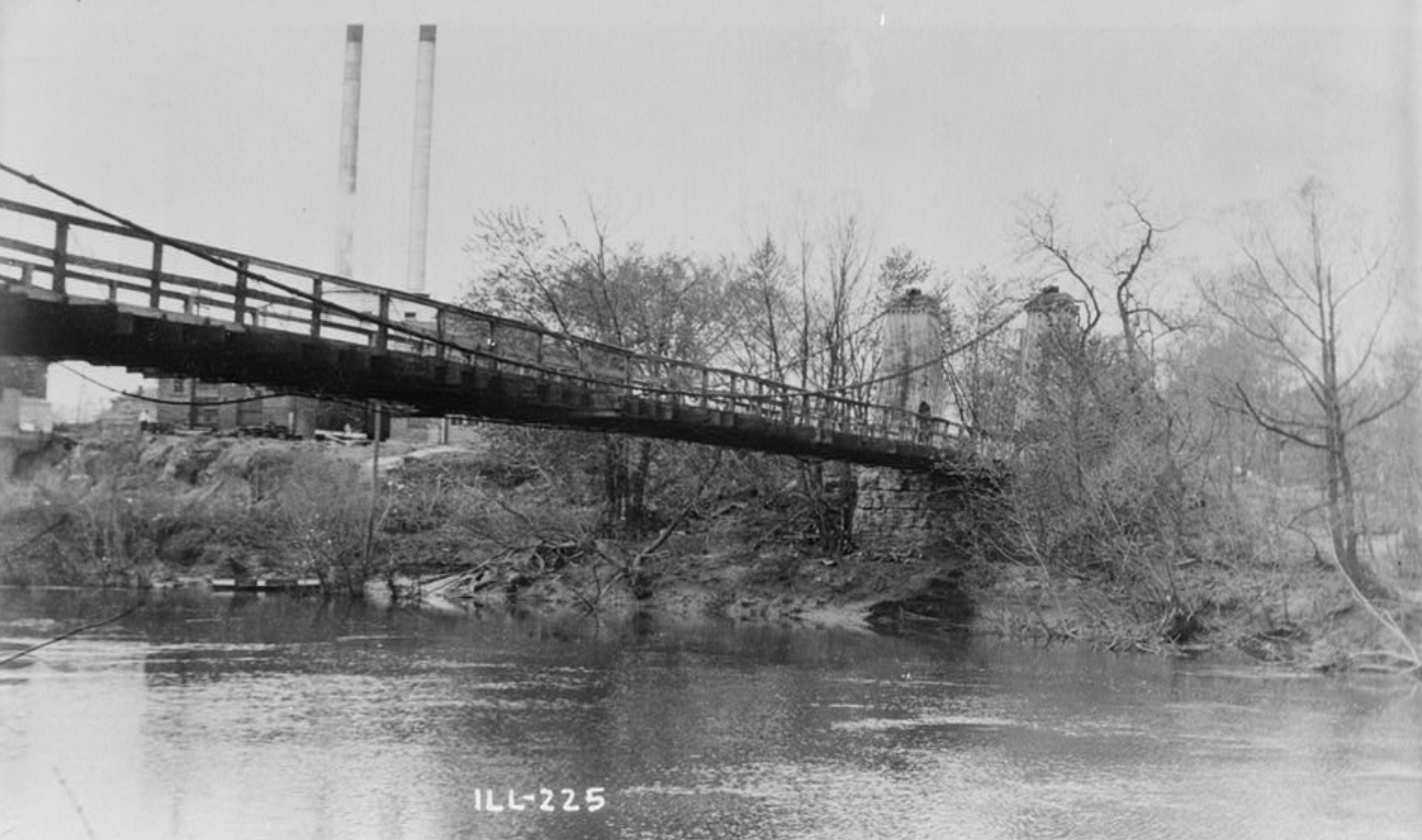 The Only Suspension Bridge Left in Carlyle

Prior to when the current structure was built, the Slade brothers had purchased and ran Hill’s ferry service until they built a bridge in 1824. Due to increased traffic and use, the bridge collapsed and was rebuilt in 1831. “Slade’s Bridge” played an important role in the Vincennes to St. Louis stagecoach route. After showing signs of decay, area residents planned to build a new bridge as this crossing over the Kaskaskia River was important.

In 1859, the current General Dean Suspension Bridge (or Carlyle Suspension Bridge) was built for $40,000, and was named after Major General William F. Dean, a native to the area and Korean War hero. The bridge spans 280 feet with four 35-foot support towers – quite an engineering marvel for its time – and it lasted for 65 years. After 20 years of decay, the bridge was restored to its current condition. This bridge is steeped in history, and was added to the National Register of Historic Places in 1973.

The Centralia Area Historical Museum, located off Route 51 in Centralia, IL, showcases the area’s incredible railroad history with three stories of vintage photographs, Civil War clothing, and even a real caboose available for tours. This area attraction is a real crowd pleaser!

You can even find some precious artifacts from the #5 Mine Disaster at the museum. Detonators, lunch buckles, and rescue equipment are all on display amongst many other historical objects.

Take a step back in time and visit the museum. It’s free to the public and is regularly accepting new items, so you just might see something new when you visit. 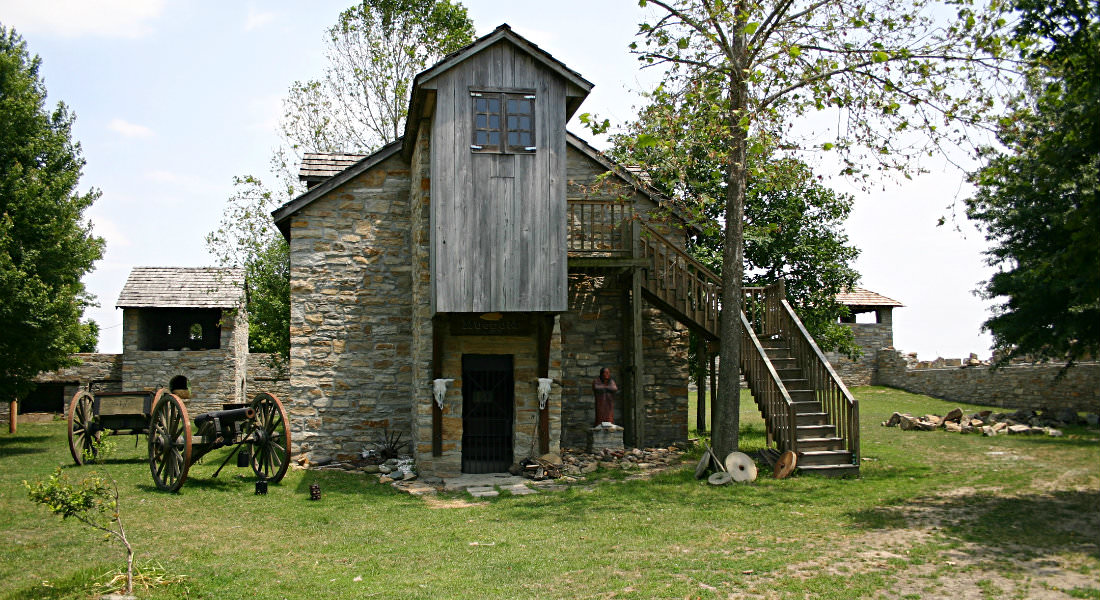 A Civil War Fort in Germantown

Built as a replica of a Civil War fort in 1984, Bob Eversgerd’s Civil War Fort is a feat of genius and craftsmanship. This labor of love replica fort sits just outside of Germantown and was built by one man, Bob Eversgerd.

An impressive structure with a 22-foot-high entrance, this civil war fort displays an exact replica of a Civil War cannon, log cabins, and jail to name a few. This site is spectacular in size and detail with massive stone structures built mainly from remnants of old nineteenth-century buildings.

Bob Eversgerd’s Civil War Fort can be toured by calling ahead and scheduling an appointment.

The Clinton County Historical Museum, a large welcoming white two-story building, is situated in the hub of Carlyle, IL, a town that beams with pride over it’s heritage. The building was originally a private residence when built in the late 1800s. It now serves history, holding many area artifacts, genealogical material, and books that give great detail about the history of the county.

Genealogical material, books, and periodicals on the history of the county can be found nestled in this former residence. You can make an appointment or drop by every Thursday from 10am to 3pm, except for the first Thursday of the month.

Many monuments and memorials are located throughout the county, including the Wamac’s #5 Mine Memorial, Vietnam Memorial, and the Veterans Tribute at Kaskaskia College in Centralia. These preserved markers of history are here to honor fallen coal miners and U.S. servicemen who gave their lives for the betterment of mankind.

Clinton County is Steeped in History

Immerse yourself in the abundant history that Clinton County has to offer. Real-world experiences as you tour a caboose, stirring memories of days long gone as you peruse old newspaper articles, visual exploration through photographs – Clinton County has it all.

Visit Clinton County and experience history like never before.